August 23, 2011
We are thrilled to tell you that Warren Tyler has joined the team at the Floor Covering Institute and he'll be posting regularly here. Many  in the U.S. flooring industry know Warren, if not through his many public speaking appearances, certainly through his regular column that has appeared in every issue of Floor Covering News since its inception.

A true entrepreneur, Warren started his own installation and cleaning business at age 22 and followed that with a 27 year retail career as owner of home furnishings, kitchen and bath, antique, interior design and flooring operations in wholesale, retail and contract. When he sold his six flooring business in 1985, he embarked upon his present career as consultants, writer, motivator and professional speaker. Surfaces says he is their best attended and highest rated speaker. He's a straight talker and like every other member of the institute - he loves the floor covering industry.  What is it about this industry that engenders so much dedication to it?  That's a conversation for another day.  Today, lets enjoy Warren as he introduces himself in the way that only Warren can.


Like an old shoe, I am hard to get rid of which is why I’ve been around so long. I hated school. As a child, the last day of school each year was anticipated more than Christmas. It was with a sense of amazement that I watched members of my graduating high school class weep because they were leaving school. If it wasn’t for hockey, I would never have spent two years at the University of New Hampshire, I just wanted to get going with my life.

Upon discharge from the military, I took a job with a carpet and rug cleaning operation which at the time had three other employees cleaning. Within three weeks, they were all fired which lead me to the fact I could do as much work as all three of them. This where I learned that one never works for the boss, you should work for your own self pride. While there I learned installation according to the book and became an independent carpet installer. With two helpers we were able to install the living room, dining room, hall and stairs in as many as three houses in a day.

At age twenty-three, I opened my first retail flooring operation. At the time I was married with two children and no money. The landlord, a builder wanted three months security to move in. My retort was that not only couldn’t I pay the security, but it was a good bet I wouldn’t be able to pay rent for a few months. After a few months of constant pestering, he allowed me to move in and I guess he made me his flooring source so I could pay the rent. This is when I found out I could sell. 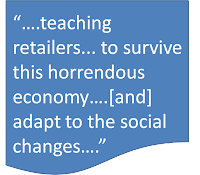 After nine years in the business, I sat in my driveway in suburban New York unable to move for twenty minutes. That night I drove to New Hampshire on a rainy Friday night. By Monday morning I had a job, a company car and credit card as well as a house. I closed my business and in three months I became the top salesperson for a 28 store home furnishings chain. Many opportunities presented themselves in the ensuing years and eventually I had six flooring stores in New England that were market leaders. I sold them in 1985 and soon after, a chance meeting with Al Wahnon in Atlanta gave me the exposure I needed to become one of the best known figures in floor covering. Starting as a columnist and consultant, my career quickly morphed into that of a professional speaker.

I always had a theme: Years ago it was “How to Bury the Big Boxes!” Today, it is “The New retail Paradigm!” teaching retailers not only how to survive this horrendous economy, but how to adapt to the social changes and prosper. From the beginning, my vocation has been my avocation and since starting this new career twenty-six years ago I have had a passion to teach fellow retailers and salespeople how to succeed. The people I have met have motivated more each year from watching a former cleaning lady sell over $800,000 her first year in sales to a middle-aged super star who was responsible for $15,000,000 in tile and stone sales each year.

As I researched and learned more and more about success in this industry over the years, I have put this knowledge to print in six best-selling industry books, the most sophisticated DVD sales program in the industry as well as scores of learning materials custom designed for industry companies. I have taught and completed projects for leading retailers as Einstein-Moomjy, Pierce Flooring, Bon Marche’ and Cole’s Fine Flooring of San Diego as well as the top five distributors in the country and many suppliers including Lauzon, Fabrica, Nourison and Milliken. My best clients have been the retail groups—CCA Global, Abbey Carpet and Alliance Flooring where I have been a featured speaker and educator for years.

My passion for the industry knows no bounds, which often had me in trouble as when I stated not long after the Stainmaster introduction that DuPont would cease to be a factor in flooring within ten years, as well as chiding the mills to stay out of areas they know little about—like retail. Being right doesn’t heal open wounds. God Bless the late Al Wahnon

I am very pleased to join the Floor Covering Institute and serve our industry with these top industry professionals. I look forward to contributing to this blog and communicating with you here. I'd love for some of my retailers to contact me - just post below and tell me what's on your mind.

Warren Tyler is a professional speaker, retail consultant and educator as well as author of several books, CDs and DVDs targeted toward flooring retailers and salespeople. He is also a consultant with the Floor Covering Institute.