How spinning the truth and lying with statistics can easily deceive

July 20, 2010
I was in 4th grade when my English teacher assigned us to write our first book report.  “Read any book you like,” she said. “Write a one page report and it’s due on Friday.”    Slow reader that I was, I remember running to the library in search of the thinnest book with the largest type I could find.  Pulling a sliver of a book from between two giant (probably more likely normal) sized books, I came face to face with How to Lie with Statistics by Darrell Huff; 47 pages of large type with pictures and graphs. My selection was made! Little did I know at age nine, what an impact that book would make on me and how many times I would think about it during my life.

This seemingly unimpressive, slim book turned out to be one of the most widely read books on statistics in history. It explained, even in a way that a nine year old could understand, how statistics and graphs can be used to twist reality.  What Huff said then may be even more true now, "The secret language of statistics, so appealing in a fact-minded culture, is employed to sensationalize, inflate, confuse, and oversimplify." His book remains relevant today. You can still buy it on line at the usual places and I highly recommend it. 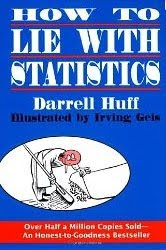 Today we call artful interpretation of statistics “spin,” and sometimes it makes your head do just that. Examples of spin include headlines that read:  “Losses Shrink” or “Sales Decline Halted.” These are nice ways of saying, “We’re still losing money.”

More egregious example are those in which only part of the story is told:  “Sales Increase 4%” was the headline but the full story was that units were down 2% and prices were up 6% for a net gain of 4% in dollars.  Some may say that expenses are paid with dollars not units but I still feel that the writer is not reporting all of the information the reader deserves.

The floor covering industry isn’t immune to this. Recently an international floor covering manufacturer reported a profitable quarter with headlines about a “Return to Profitability” when their increase in profit was really generated by currency fluctuations.

Another example is: “Ceramic Sales Plummet While Carpet Regains Market Share.”  Does this signal a major shift in consumer taste?  No.  It simply means that new home construction is dead as a doornail.  Ceramic, which is installed in every new home, is not replaced as frequently as other products.  Carpet on the other hand wears or uglies out and needs to be replaced, hopefully every seven years on average.  Hard surface purchases can be, and often are, postponed during uncertain economic times while carpet, after a three plus year recession, is another story. It's getting replaced.  So yes, carpet is gaining share now but don’t read any more into it than it's a short term blip.

Other examples of spin we need to be concerned about include claims used in “green washing,” meant to speak to the environmentally curious consumer.  Claims of oil based products containing X% of natural or recycled content, or natural products produced using more energy and water to finish than their artificial replicas are just a couple of examples.  Nobody wants to talk about their product’s drawbacks and there are too few common comps or measurements we can use for credible comparisons.

Whether viewed on TV, newspapers or the Internet, news and facts are often editorialized. Like Sergeant Friday used to say on Dragnet, “Just give me the facts ma’am.” Unfortunately too often consumers of news have to search between the lines to find the truth. I have to say that one organization that is working to get to the truth is the American Hardwood Export Counsel (AHEC) with their complete life cycle study on the carbon footprint of timber.  I mentioned this earlier in my post on wood flooring and carbon sequestration. I’m looking forward to seeing those new facts.

I am sure you have seen similar examples of spin and creative statistics; why not share some of them with our readers here?

Jim Gould is President of the Floor Covering Institute