Stuart Hirschhorn: Residential Flooring Replacement Sales May Rise in 2010 - 1 of 2 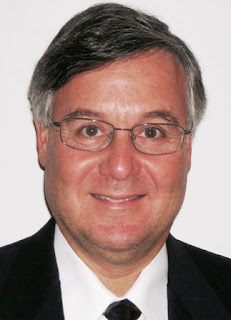 Hello, I am Stuart Hirschhorn, founder and director of research for Catalina Research, Inc. I am also a consulting member of the Floor Covering Institute so you will be hearing from me periodically on this blog. Today I want to share some Catalina floor covering research that points to an upturn in the U.S. floor covering market in the second half of 2010.

The decline in U.S. floor coverings square foot sales (shipments minus exports plus imports) continued at relatively sharp rates in the second and third quarters of 2009 (see chart). However, the rate of decline improved somewhat from the first quarter plunge. In the second quarter of 2009, square foot sales declined by 15.3% and sales are estimated to drop by another 14.9% in the third quarter. This compares to a revised 19.5% decrease in the first quarter of 2009. Based on these trends, the fall off in square foot sales during 2009 will be worse than the drop in 2008. 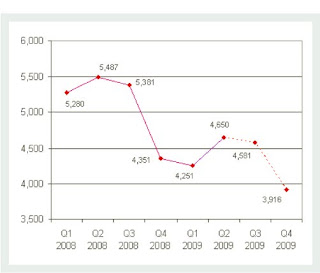 The sharper decrease in floor coverings square foot sales during 2009 is due to the continued contraction in residential markets and the weakness spreading to nonresidential markets. In the private residential construction market, spending declined by one-third in the first half of 2009, versus a 29.0% drop for all of 2008. Meanwhile, the contraction in housing starts accelerated during 2009 as foreclosure and unemployment rates rose. In addition, the homes that were completed were smaller and sold at a lower cost. This further reduced sales to the builder market.

The estimated 9.0% decline in private nonresidential construction spending in the third quarter of 2009 added to the downward pressure on floor coverings sales. The decrease in this market was due to the nearly 19.0% decline in corporate profits in the first half of 2009. The downturn in nonresidential markets over the next few quarters may be as steep as the one seen in residential markets a year earlier. Government purchases is currently the only market providing growing sales opportunities during 2009.

The decline in floor coverings square foot sales is occurring in all industry sectors. However, consumers have shifted their preference for lower-cost flooring. In the first half of 2009, carpet and area rugs, resilient flooring, and laminate flooring either increased or held onto their share of total industry sales. These are also the industry’s lowest-cost product lines, especially on an installed basis. Ceramic tile suppliers changed their product mix to take advantage of this trend in the second quarter of 2009. During this period, ceramic tile manufacturers and marketers cut average prices by 10.2%, allowing them to regain some lost market share. On the other hand, wood flooring continued to lose ground in the second quarter for this relatively high-priced flooring material.

The question now facing the industry, is there any light at the end of the very long dark tunnel of declining U.S. floor coverings sales? If there is, it is showing up in existing home sales trends, which influences floor coverings’ most important end-use market, residential replacement sales. Existing home sales are estimated to rise by 4.8% in the third quarter of 2009 over the same period of the previous year. This compares to a 2.8% drop in the second quarter, a 7.4% decrease in the first quarter, and a 13.1% decline for all of 2008. Catalina estimates that existing home sales could rise by 5.0% to 10.0% in the fourth quarter of this year.

The turnaround in existing home sales is due to increasing housing affordability as average home prices and interest rates declined and government programs to stabilize the housing market, especially the $8,000 first-time buyer tax credit. These positive trends could result in a healthier floor coverings retail market in the third and fourth quarters of 2009, since some 10.0% of homebuyers invest in new flooring in the first year of ownership.

We may already be seeing early signs of this trend at specialty floor coverings stores. In July 2009, specialty floor coverings store sales decreased by 16.9%. However, this is an improvement from the 19.7% drop experienced over the first half of 2009. The improvement may be tepid, however, it is the first significant sign that the contraction in the U.S. floor coverings industry may finally hit bottom. This is great news for an industry that has seen sales decline by 10 billion square feet over the past four years, or a drop of 37.8% from peak demand in 2005.

Feel free to contact me any time at shirschhorn@informationgiant.com
Stuart